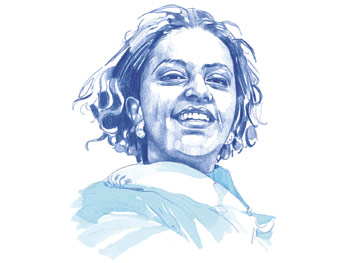 Ethiopia -This is my Ethiopian story- By Eleni Gabre-Madhin

Much has recently been made of my ethnic identity although this is a matter of no relevance whatsoever to a reasoned discourse on the existence of the Ethiopia Commodity Exchange. However, when the unnecessary gets in the way of the important, however unpleasant it may be, it must be faced. I am Ethiopian, as truly and wonderfully as that is, and no one has the right to define, reduce, or otherwise dismiss my identity. I do not apologize for or defend who I am, as each one of us, whoever we are, has a God-given set of circumstances that uniquely defines us.

My reality is that, born in Addis Ababa, I first left Ethiopia with my family at the age of four to live in New York city, accompanying my father, Zaude Gabre-Madhin, who was a senior United Nations official, prior to which he served in the Imperial government. Upon returning a few years later, my family then left Ethiopia again, escaping the chaos of the new Dergue regime, this time to Rwanda and later Togo, Malawi, and Kenya. I thus grew up in six different countries, going to school in French as well as English, and learning Swahili along the way. Throughout this time, my parents, to whom I owe everything, instilled in me and my sisters the deepest love and pride for our country Ethiopia. As I grew up in different cultures, grappling to understand my adolescent identity, I drew on the stories my parents told me of my heritage and of those who came before me. My mother, Bizuwork Bekele, who never missed a chance to boast about her beloved Harar, shared stories of my incredible great-grandmother, Imahoy Saba Yifat, from Menz and Gondar by origin, who lived in rural Hararghe as a widow after the Italian invasion and was one of the few women fighters of her time standing up to the invaders to defend the land and her six children. I heard about her son, my grandfather, Ato Bekele Haile, a respected magistrate serving as a judge in Harar town, himself of Gurage and Amhara ancestry, and of my mother’s birth in the historical site today known as the House of Rimbaud. As a young child, I loved to sit for hours with my maternal grandmother, Imahoy Beletshachew Habte-Giorgis, a witty, intelligent,and extremely strong-willed woman who would often exclaim in Afan Oromo which she and her children, including my mother, spoke fluently, as she laughed recalling how she managed her coffee farms in the areas around Jijiga, Fedis, and Deder, where many of my relatives still live today.

My father, for his part, mostly to amuse his daughters, named the water tank in our UN provided house in Kigali, Rwanda, “Bulga Springs” to recall his father’s birthplace in northern Shewa. He would proudly speak of my grandfather, Fitawrari Gebremedhin, a noble and highly disciplined official in Emperor Menelik’s time, who later settled in Wolaita Soddo in the late nineteenth century, marrying my grandmother, Woizero Ayalech Alaye, niece of the great Wolaita King Tona. At the age of seven, I remember visiting Soddo where my father was born and where many of my relatives still live, to spend time in his last years with my grandfather who was then nearly a century old. A tall, dignified, and handsome man, deeply religious, my grandfather showed me and my sister his coffee farm and I remember him speaking of my much loved late grandmother, and of his childhood and the family still in Bulga, and his laughing politely, not understanding, as I chattered to him in English with children’s jokes I had learned in New York.

Thus I grew, within and outside Ethiopia, celebrating all the different identities and cultures that are woven beautifully into the tapestry of my identity as an Ethiopian. To my parents, always , we were Ethiopian and that was something to be deeply proud of, recognizing and cherishing all of our different ethnic strands. I never knew until much later, nor did it matter, which particular ethnic group I should claim. In my extended family, my aunt married a man from Wollega and my uncle married a woman from Asmara, my great aunt married into the Abba Jifar clan in Jimma, and the list goes on. So the Ethiopia I knew growing up with my cousins was a kaleidoscope of identities bound together in one Ethiopia.

Ethiopia is ours, to claim, to build and to restore. Rather than engage in destructive ethnic bigotry, far better to embrace all of what we are and to build together a better future for our children. My personal identity is irrelevant to my choice or ability to lead an initiative to bring a better marketing system for all Ethiopians, regardless of their ethnic roots or which corner of the country they claim. A market is above all a connection between humans, an exchange of goods and money that links two sides. The market is neutral as to who is on either side, it is the connection that counts. I have always
found traders to be the most pragmatic people in the world. Let us too live by this market principle: we are far richer and far stronger if we build on our connectivity to each other in meaningful ways, and that much weaker if we seek isolation and succumb to narrow divisiveness. Let us be like the market. I believe it is our only hope.