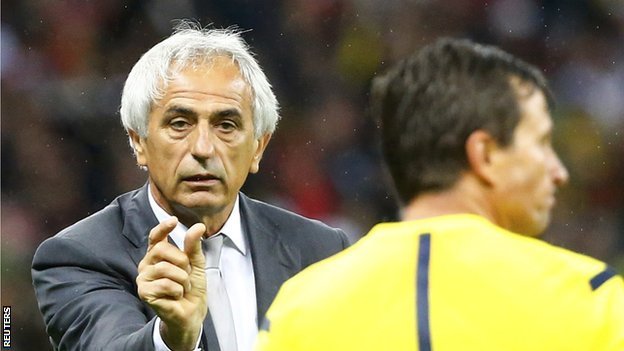 Algeria coach Vahid Halilhodzic has left his role despite a personal plea from the country’s president to stay.

The Bosnian steered the Desert Foxes to the World Cup knockout stage for the first time before they lost 2-1 in extra time to Germany in the last 16.

Algeria president Abdelaziz Bouteflika asked Halilhodzic to stay but he cited “the lure of a new sporting challenge” as one of the reasons for going.

The 61-year-old is expected to named the new coach of Trabzonspor in Turkey.

“I leave proud of my record after serving out my contract with the FAF [Algerian Football Federation],” Halilhodzic said.

“Having lived for three years in Algeria, my family obligations and the attraction of new sporting challenges weighed heavily on my decision.

“I want to thank the president of the FAF, Mohamed Raouraoua, with whom I have worked for three years to realise our objectives and who put at my disposal a squad with all the necessary means to achieve this difficult mission.

“I wish to pay tribute to the players and the technical, medical and administrative staff who gave me every assistance throughout this mission.

“The wonderful Algerian public wished me well since the day I first arrived and have remained loyal to me. I will always keep the fond memory of the extraordinary welcome they gave us on our return from the World Cup.

“The only sour note, which I want to confront, is the behaviour of certain – though thankfully not all – members of the press, who never ceased to stigmatise not only my work but also me and my family.

“I will never forget nor forgive that.”

Algeria lost 2-1 to Belgium in their opening match in Brazil before defeating South Korea 4-2.

A 1-1 draw against Russia was enough to secure a place in the second round and spark mass celebrations in Algeria.