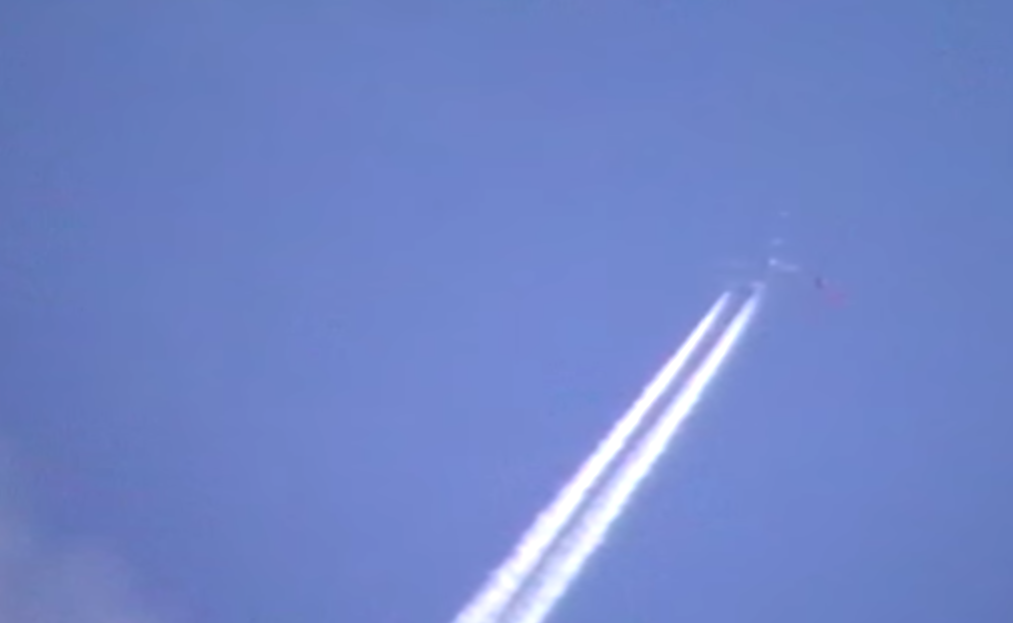 An incredible UFO video was uploaded to YouTube on Oct. 12, showing what appears to be an unidentified flying object “refueling” itself in the chemical contrail of a jet flying high above it. The strange object, which resembles no known aircraft, and flies in a decidedly non-aerodynamic manner, seems to intentionally head directly into the chemtrail of the passing jet and hovers for a moment before moving on.

The original intent of the video appears to be an effort to document the contrails of the jet plane. However, the witness filming the action seems to have accidentally caught the weird UFO behavior. As the unknown object passes through the chemtrail and halts for just a moment, the videographer notices the movement and manages to follow the UFO rather than the jet.

The nearly two minute video shows the original, unedited footage, without enhancement, in the opening segment, before switching to a magnified and slowed down version, which doesn’t help to clear up the mysterious behavior of the unidentified aircraft. In fact, the closeup reveals that, although there seems to be a flashing, navigational beacon on the UFO, its shape and configuration resembles no known aircraft, such as a helicopter, airplane or even a drone.

The chemtrail controversy has been raging for a few years now, with conspiracy theorists arguing there must be some secret meaning behind their sudden proliferation. Could this incident explain the phenomenon? Is it possible that alien aircraft are using the chemical exhaust fumes of high flying aircraft to refuel spacecraft in Earth’s atmosphere?

What do you think? Is it possible UFOs are refueling in the wakes of jet chemtrails? Or is this just a coincidence? Check out the video published above and please feel free to leave a comment below if you have anything to add to the story.